DIY enthusiasts don’t need a reason to do something out-of-box. Using twigs you can think of umpteen décor crafts that can be done with a little effort. So here is a list of some eye-catching chandeliers you can make with a bunch of twigs. If you some twigs lying outside in the backyard, it’s time to use them to create a beautiful roof decoration piece. Depicting a fairy tale-like scene, the chandelier made from white twigs is a treat for the eyes. 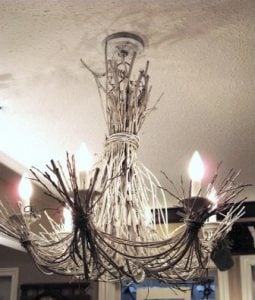 You can always bring nature closer to home with a simple decoration and lighten up your space. How to Make a Twig Chandelier Have you ever done something interesting with a bunch of twigs and an old lamp? Follow the tutorial to learn the craft. The lights on the slender twigs resemble a starry night. This DIY project is a must-try for Christmas. A lot of can be done with driftwoods and twigs that are often found lying on ground or sold at stores. If buying expensive chandelier is not in your mind, try out the options given above.