While you gear up for decorating your home during Christmas, how can you leave snowflakes behind!Â Amongst the variety of upcycled stuff you can make snowflakes from, popsicle sticks are one of them. Gather a whole lot of these sticks and arrange them into cool looking snowflakes. The given tutorials would acquaint you with a clear insight on how to make snowflakes using popsicle sticks. The array of colorful snowflakes sitting all over your wall would make your home glow during the festive season. Make more of these giant-sized snowflakes to add fullness to your walls. The glitters give the snowflake a gorgeous appeal. How to Make Popsicle Stick Snowflakes

If you have a big wall, make many of these snowflakes and arrange it in the form of a wreath for a stunning visual impact. How to Make a Popsicle Stick Snowflake

While hanging these snowflakes as ornaments on Christmas trees, you may embellish them with glitters, sparkles, buttons, pompoms or anything else to give them a stunning appeal. Popsicle Stick Snowflakes: Do it Yourself

You can make a combination of snowflakes and stars hanging gracefully on your wall above the mantelpiece. The yarn woven intricately around the popsicle sticks is indeed unique. You can put a pompom in the middle. Your kiddos would enjoy arranging these popsicle sticks in a symmetrical way to make their favorite snowflake. Ask them ideas to decorate the snowflakes in order to sharpen their creative skills. You can color the snowflakes in such a way so that it matches your wall paint. This pretty pink snowflake would serve as a wonderful topper for your Christmas tree. Forming snowflakes with the mini sticks and then placing them on the big one is indeed a fabulous idea. How to Make a Frozen Character Glitter Snowflake Craft for Kids

On your kiddos birthday you, can design pretty snowflakes in the shape of a picture frame and fill it with photos from his favorite Disney film Frozen. This idea can even be implemented for adding photos of your kit and kin within a giant-sized snowflake. You can paint the sticks alternately in green and red to bring in the Christmas mood. If you have problem in deriving the accurate shape of the snowflake then you may take aid the of a template. While using it as a Christmas ornament, you may confine to the shades of red and green. The gold spray paint adorning the snowflakes gives them a magnificent look. 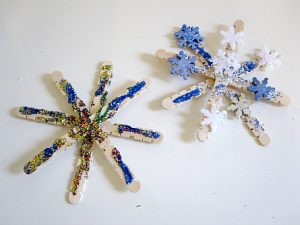 With these bunch of exciting ideas you would definitely be able to deck up your home with several colorful snowflakes. If you have a passion for designing snowflakes and want to try a lot of creative things with it then try your hands at making them using a coffee filter, crocheted patterns, 3D paper, or even design them beautifully on your nails.