It may sound surprisingly weird, but some less familiar friends, colleagues, or relatives would have unknowingly gifted you those typical glass photo frames on a special occasion that are now collecting dust instead of decking the walls and showcases of your house. After all as a DIY artisan your choice will be something different yet creative. Presenting here is an array of quirky ideas for making a picture frame from a cardboard with fascinating designs to leave the homecoming guests stunned right at the first glance. 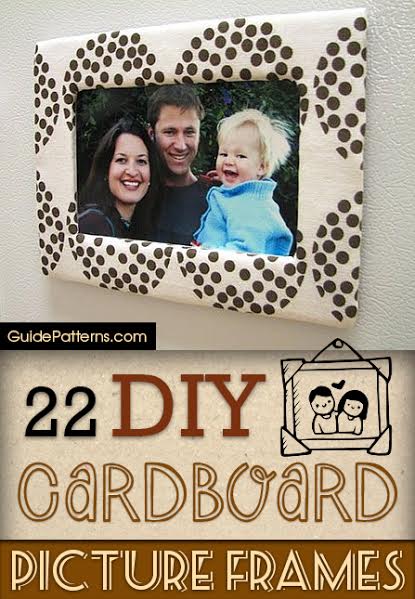 Give a stylish dimension to your most cherished photos with picture frames made out of cardboards and colorful yarns adding dollops of hues to the bare walls. The white cardboard frame is given a touch of abstract art with some zigzag painting at the sides and corners. Kudos to the idea of sticking glittery sequins at the bottom for an eye-catching effect. At the first look, the glossy effect of the DIY photo frame will simply amaze as itâs a plain work of spray painting the cardboard frame embellished with discarded jigsaw puzzles. Now the black and white photos have finally found a place for exhibition. Have you ever wondered how cost-effective would be a gift made from few scrap materials? Just click on the link if you are right now thinking about buying a picture frame for your buddy. Are you smitten with mosaic art? Cut out a cardboard and pull out the felt pens from the drawer to get started with this interesting photo-frame making a craft. How to Make a Cardboard Picture Frame

Create picture pops on the shelves, table tops, or walls with cardboard picture frames wrapped in gorgeous scrap papers. Not to forget, here the buttons from your old dresses can be given a facelift in an effortless style. Cardboard cut outs and recycled corks snugly sit on the frame as another winsome decor accent in your house. Letâs see what more new ways you can come up with for decorating the dull-colored frames? When everything in the house is being made ready for the Christmas, your handcrafted picture frames should not lag behind. Scrap paper and ribbons all shimmering in red, white, and green give you a unique festive-themed display framework. How to Make Picture Frame Out of Cardboard

Cardboard Picture Frame: Do It Yourself

Avid crafters will admire the way cardboard paper is transformed into a picture frame for showcasing beautiful kidsâ art. They can be used to decorate the walls of a kidsâ room. If you love the concept of collage work, then do wonders with the white cardboard frame making the best use of your creative imagination. An elegant finish is given to another cardboard frame neatly painted in two colors. Newspaper and magazine paper strips glued to the cardboard frame for styling your photos. Contrary to what you are thinking, the buttons attached at the nook are actually made from long strips of the paper rolled spirally to get this epic effect. When you have tons of old photographs that have no place in the family albums or the hard disk of your PC, the cardboard picture frames come with a promise to treasure your best memories for a lifetime. A nautical theme for a gigantic cardboard photo frame reminds you of a favorite movie scene. A birthday party without a photo booth dampens the spirits of your friends, especially when they want to give insanely funny poses for the camera. With a mammoth cardboard frame, things look easier and better. Repurposed picture frames have made it to the list of this yearâs most favorite and splendid DIY craft, especially during the festive time. So wonât you jazz up your decor with a gallery of photos of the past for adding some nostalgic warmth in this freezing month?