Though making your own paper mache pumpkins turns out to be a long project thanks to the ample drying time needed, you would be an instant fan of them once they are painted and fully ready. Scroll down to know more about the innovative ideas that go into making this amazing décor item. 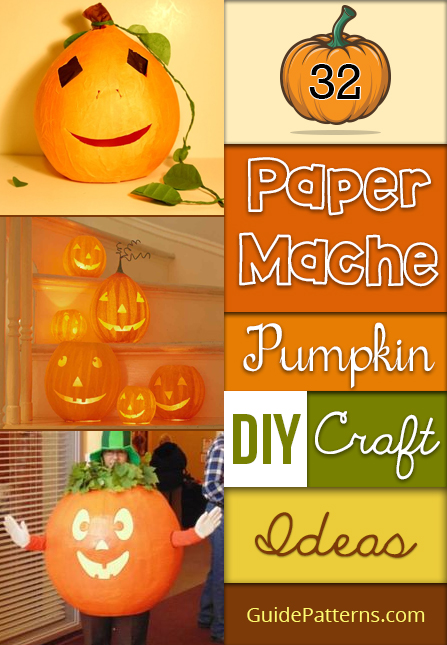 This huge paper mache pumpkin could be a fun addition to your mantle on Halloween and Thanksgiving. 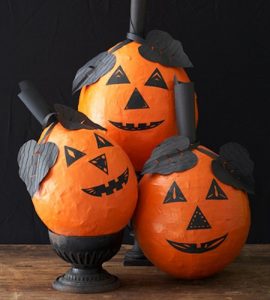 Tired of the plastic pumpkins that take center stage in Halloween decorations? You can DIY one having all the irregularities and the shape of a real pumpkin using paper mache. Click on the above link to know how. A rim of plastic modeling clay was made to encircle the pumpkin to make a two-piece mold. The scary effect of this face was brought about cleverly by using crumpled newspaper as the top layer of the head. 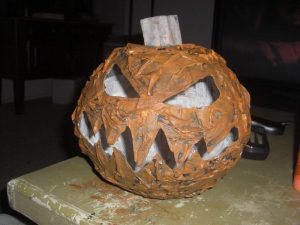 Stacking a complete paper mache pumpkin head over another decorated one devoid of the facial features can make a chubby man. Check how the collar is made out of wrinkled old newspaper. The looks resemble that of a clown. 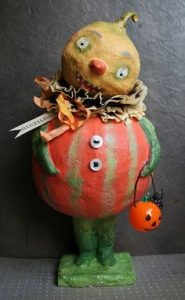 This giant paper mache pumpkin uses a large plastic trash bag stuffed with old newspapers, plastic bags and magazine pages as the basic structure that is later covered up with several layers of newspaper joined with a superb paper mache paste recipe. Masking tape all around the edges of the trash bag forms the ridges of the pumpkin. 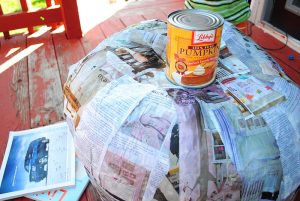 How to Make a Paper Mache Pumpkin

A balloon is first made to resemble a pumpkin’s shape by wrapping ribbons all around its body. The finishing touch involving painting with vintage white acrylic and mod podge and topping off with a doily makes this one unique. Since this beautiful customizable project takes a few days to finish, if you are planning to put them up for a gathering, you should perform steps 1-3 much ahead of time. Your guests are going to cherish the sights of the antique paper mache pumpkins for a long time after the visit. 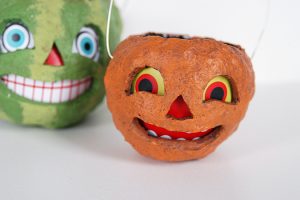 Simple crumpling of newspaper into a ball, tape cinching for making the indents and you are all set to dab the paper mache solution on.

Getting a large balloon to stretch elastic bands all around is an important part of this project before creating the paper mache shell. 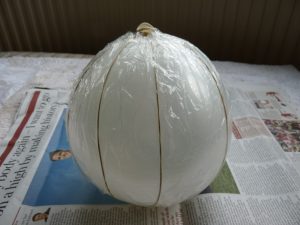 Instead of Halloween, for festive décor that lasts throughout fall, you can skip the step involving cutting the facial features and just leave it plain or give it an orange coat of paint if you wish to. Learn the steps of making a brilliant paper mache pumpkin lantern to keep your living room illuminated cheerily. Kids will love it when you make a smaller version and fill it up with sweets. 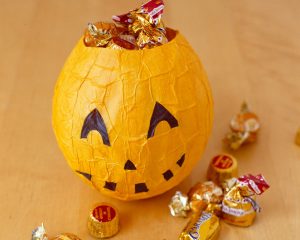 For a little girl obsessed with Cinderella, you can decorate a glossy paper mache pumpkin, cut out the doors and windows, and attach half cut smaller versions to the base with hooks to serve as the wheels.

It is completely up to you how big you want the eyes along with the sockets and the pointy teeth coming out of a nearly crescent mouth. You can either create a stalk at the top of the pumpkin or just leave a hole in its place as demonstrated in the linked tutorial. 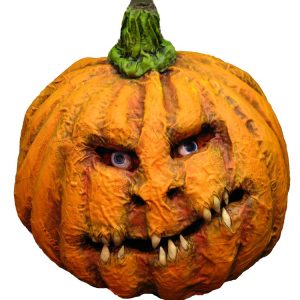 You can hang this smiling jack o’lantern from the ceiling, or humbly put it on a table or the doorstep to enchant your visitors for Halloween.

Include children in this exciting holiday craft. While you can help them with the initial steps, the cutting out of the eyes, nose and mouth and coloring of the face is best left to the kids. The activity is surely going to take them for a ride.

This comprehensive video gives a detailed recipe of the paper mache mixture along with the other instructions. 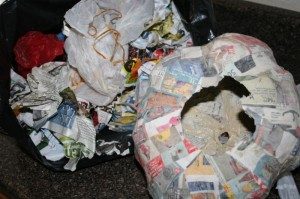 Children, as well as adults, will be eager to put on this plump yet lightweight costume once you have finished making it. 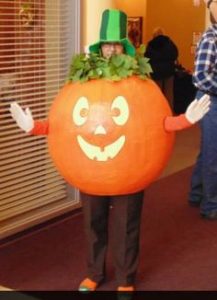 The dotted crescent shape of the mouth representing a toothy grin and the slit-like eyes and nose depicting a brooding pumpkin makes an adorable paradoxical mask. 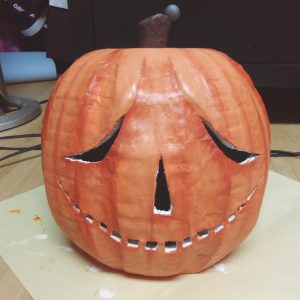 The plain old traditional paper mache procedure together with a few modern twists here and there makes this brilliant prop for cosplay. 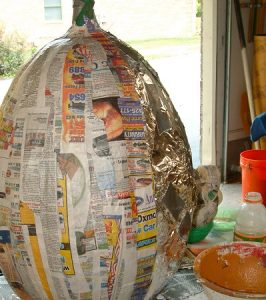 Click on a link given just at the beginning of the linked tutorial to get redirected to the website that inspired the author to make these spooky faces. 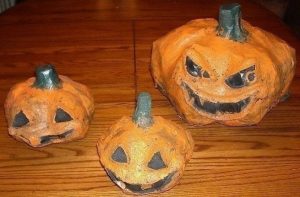 The picture below is that of an unfinished paper mache pumpkin in one of its intermediary stages of making. What follows is cutting the facial features with an exacto knife, spray or acrylic painting and hanging it outdoors on a string of lights. Great! Isn’t it? 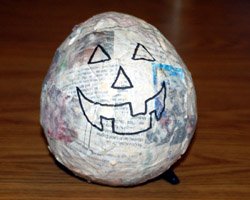 After making the piñata in your desired choice of colors, you can cut black tissue paper for the queer eyes and roundish mouth. 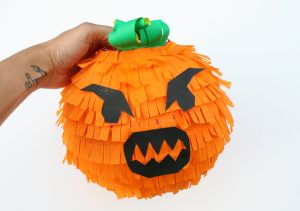 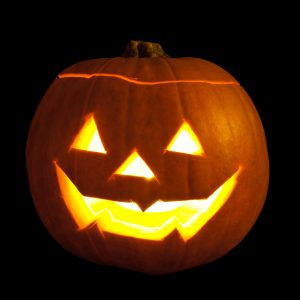 You can also create a paper mache pumpkin bowl or box for storing your goodies. Lanterns Out Of Papier Mache Pumpkins

Each and every foreign language paragraph on the above-linked website has been given an English translation in the following paragraph. 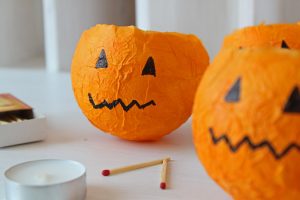 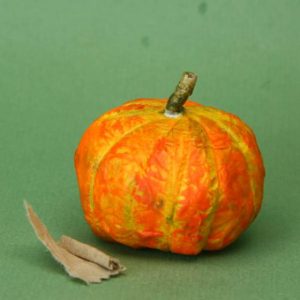 This giant pumpkin looks amply succulent to give you a whale of a time this holiday season. 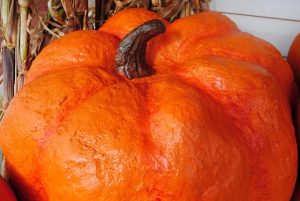 How to Paint Paper Mache Pumpkins

Let your paper mache, balloon, scissors and paint take on from here. Get ready to hone your craft skills during the festivities.